The medieval dagger was used by knights and fighting folk in cases of self defense, as well as more desperate occasions of last resort.

Dagger Attacks introduces you to the medieval dagger and describes the grips and attacking lines on which thrusts are made.

We then walk through the Nine Master Positions outlined in our system of dagger combat. These positions closely follow those of fourteenth-century master Fiore dei Liberi (with a few notable places where we re-order the masters for easier learning).

The First Master defends against the mandritto, or downward attack from the opponent’s right side (a forehand attack). Being the most common attack, there are many ways to make counter-attacks after the initial defense.

The Third Master defends against the roverso, or downward attack from the opponent’s left side, (a backhand attack). This gives us easy access to the opponent’s elbow and back to make our concluding plays.

Finally, the Second Master meets the opponent’s attack with two hands crossed, and from the initial defense moves to conclude its plays in the ways of the first and third master positions.

Acknowledgement of Safety and Risk 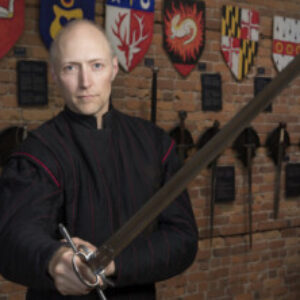